MADELINE GINS'S VISIONARY CYBERNETICS
An exhibition of the work of the late Madeline Gins reveals an artist, architect and poet who pushed language into intensely imaginative and speculative realms

In the spring of 1969, the poet and artist Madeline Gins, then in her late 20s, joined a collaborative effort to make artworks and writing on the streets of Manhattan. With John Giorno, Lucy Lippard, Adrian Piper and Hannah Weiner, among others, she contributed to the ﬁnal issue of Vito Acconci and Bernadette Mayer’s legendary magazine 0 to 9, which took the form of a supplement titled Street Works. Gins’s submission was a ‘group novel’ for which she asked the reader to ‘Please ﬁnish these sentences and return this paper,’ with the ultimate goal of creating ‘a group novel, an historical novel, an exploration of the nature of consciousness’. Also included in Street Works were photographs by Gins and her husband and collaborator, the painter Shusaku Arakawa, of a stylized house ﬂoor plan, laid out on a plastic sheet that could be unfolded on the sidewalk. This floor plan also appears in the endpapers of Gins’s ﬁrst book, WORD RAIN: Or, a Discursive Introduction to the Philosophical Investigation of G,R,E,T,A, G,A,R,B,O, It Says (1969), suggesting a connection between the exploration undertaken in Street Works and WORD RAIN’s ecstatic experimental prose.

If you don’t already know who Gins is, the above may sound somewhat academic. It’s another account of fascinating, if minor, permutations in the history of conceptualism in the US, adding some small complexity to the narrative surrounding the anti-lyric poetry of Acconci, along with that of the likes of Dan Graham and Douglas Huebler. Gins was barely better known in US poetry circles than she was in the realms of contemporary art, and her brilliant reimaginings of the American novel and poem have largely been ignored. WORD RAIN – one of the most important works of experimental prose of the later 20th century – is at once refreshingly and depressingly spared academic commentary. Gins’s books are out of print and she has few champions. Though this spring’s ‘Eternal Gradient’ – an exhibition at Columbia University’s Arthur Ross Architecture Gallery – revisits collaborative sketches by Arakawa and Gins from the 1980s and, though Arakawa is now represented by Gagosian Gallery, Gins herself is not widely noted or remembered.

The reasons for this amnesia are manifold. It’s pointless to linger on the obvious: Gins was female, straight and seems to have taken the exigencies of marriage fairly seriously. Secondly, many histories of poetry’s relationship with conceptualism have tended to focus on the static materiality of language, to the detriment of descriptions of interactivity. Though there are exceptions, conceptualism’s role as critical capstone to trajectories of US art, including modernism and minimalism, has entailed the reduction of language to ‘a kind of object’, as critic Liz Kotz has written. Accounts of language-based conceptualism emphasizing what the artist Roy Ascott, in his 1966 essay ‘Behaviourist Art and the Cybernetic Vision’, termed ‘the ﬁeld of behaviour’, are rarer.

Unlike the ‘group novels’ of Huebler and Andy Warhol, Gins’s project was not a site for the confession of secrets and gossip. It was concerned with getting the reader to act. Like Acconci’s poetry, which played with the instructive nature of writing and punctuation marks to explore their possibilities, or Graham’s Poem (1966), a schema and list of ‘materials’ for the creation of a poem, Gins’s early writing was self-reflexive but also did something more. In WORD RAIN, she directly engaged the cybernetic qualities of conceptualism by deploying sentences and prose fragments as means for holistic control of discourse, the human body and social relations, confusing the agency of the writer with that of the reader. This occurred in a manner that reﬂected Gins’s literary and transdisciplinary concerns, resulting in what might be termed a ‘visionary cybernetics’: her interest in systems and communication often went beyond descriptions of what is merely possible into intensely imaginative and speculative realms. Gins treated the slow dawning of the computer age as an incitement to produce art.

Read this with me, read that with me, read me with me, read objects (tables, toes, toads, tails, tin, trains, type, tears, throat) read write read right. This is still life. Only I write and read. If you’ve misplaced me on your own, bring me up again from off this page […] I give you this book for a present. It comes with a room, light, a country, sky and weather. I will arrange for you to be made aware of these in detail. You may look at everything. You will see only what I see. Look at this sentence.

Whereas much late-20th-century US experimental writing is myopically concerned with the linguistic turn (a recognition of the arbitrary and systematic nature of the shapes of letters, as well as the sounds and forms of words), Gins’s narration in WORD RAIN places unusual emphasis on the experience of being, simultaneously, a producer and receiver of writing. Experience – tactile, olfactory, temporal, visual, etc. – is folded into Gins’s sentences; the sentences, in turn, produce such experience, which must be (re)described in a sort of feedback loop. WORD RAIN might thus be a memoir of the present, of the very instant of writing, a sort of homeostatic temporality occasionally difficult to differentiate from a biochemical mix that includes the body of the reader/writer as well as the interface of the page.

WORD RAIN has no direct American literary antecedents. Though it superficially recalls various forms of stream-of-consciousness writing or Gertrude Stein’s bristling syntax, its strategies are specific to its phenomenological obsession with the reception of writing that occurs even, and especially, in the very midst of writing. This interest in what Gins describes as the flickering, oozing ‘Chaplinesque persistence of consciousness’, as recorded in and affected by the work of art, is not easily reconciled with modernism’s obsession with literary form and the dramatic upending of academic categories. Nor does Gins’s work dovetail neatly with postwar late-modernist and postmodern literary experimentation. One can’t quite group her with John Cage or Jackson Mac Low, who were so deeply concerned with chance operations and collage; Yoko Ono’s fluxus tasks are, meanwhile, more meticulous in their articulation. Though there are some resemblances between WORD RAIN’s complex sentences and those of poets such as Lyn Hejinian, Bernadette Mayer and Leslie Scalapino, perhaps the most convincing analogue is Gins’s friend, the poet Hannah Weiner. A cybernetically inclined writer and performer, Weiner has, of late, had her work translated from the page to the gallery, notably in a 2015 retrospective at Kunsthalle Zürich. In a piece titled ‘Transspace Communication’ (1969, written to accompany performances of her ‘Code Poems’), Weiner cogently observes: ‘The amount of information available has more than doubled since World War II. In the next ten years, it will double again. How do we deal with it?’ She continues: ‘At the moment, I am interested in exploring methods of communication through space; considering space as space fields or space solids; through great distances of space; through small distance, such as the space between the nucleus and the electrons of an atom; through distances not ordinarily related to the form of communication used.’

Weiner treats the poem as a tactical event, an act of communication that occurs ‘through great distances of space’. The ‘Code Poems’ themselves, which were published in 1982, contain lists of flag signals, typically used to transmit messages at sea. Her appropriation of maritime technology reimagines the flag hoist as a noisy, lyric gesture; previously precise code becomes the seed of a form of address that cannot be assigned a single interpretation. One excellent short poem, ‘CHW Pirates’, runs:

CDJ I was plundered by a pirate
CJF Describe the pirate
CJN She is armed
CJP How is she armed?
CJS She has long guns
CJW I have no long guns
BLD I am a complete wreck

Here, the colloquialism ‘to be an emotional wreck’ receives a rough etymological (and romantic) reading. This string of signals is to be imagined as performable – indeed, even potentially performed – as the poem is read. While Gins’s sentences in WORD RAIN are more concerned with the time of writing in domestic space, they make similar claims regarding the significance of spaces and technologies of communication and the ever-increasing amounts of information available. WORD RAIN’s sentences are complexes of signals that transmit and confuse sensation, allowing the reader to become an energetic receiver, an accumulator, a transformer – even and, most visionary of all, the avatar of the writer.

Given her somatic and cybernetic obsessions – trans-disciplinary concerns if ever there were such – it is additionally difficult to categorize Gins in a professional sense, whether as poet, writer or artist. Though she went on to include lineated poetry in her 1984 collection, What the President Will Say and Do!!, she returned to prose for 1994’s Helen Keller or Arakawa: a book that, like WORD RAIN, stretches the category of ‘novel’ in highly original directions. In each of these works, Gins blends keen observations about the activity of consciousness, language and syntax – as well as her own body and environment – with wry humour regarding the oddness of the very existence of meaning. As we see from the title of her second novel, Gins’s collaborative relationship with Arakawa became increasingly central to her work; poetry was a space in which she devoted herself to depicting the interrelationship of consciousness with physical and biochemical processes. Indeed, if readers of this piece know of Gins, it is likely that they know her through her collaboration with Arakawa. Together, they founded the Reversible Destiny Foundation and produced the well-known installation piece and publication series ‘The Mechanism of Meaning’ (1963–73/1978/1988/1997). Though Gins was a prescient thinker – who foresaw ways in which changes in popular media and technologies would collapse traditional disciplinary and social boundaries, transforming everyday life – her role at the centre of an architectural firm devoted to creating environments that were conceived to prevent inhabitants and visitors from dying has sometimes overshadowed her other achievements. Belief in the possibility of immortality seems hubristic, if not delusional, to many – even in the age of research and development companies such as Calico, who are actively seeking solutions to ‘combat ageing and associated diseases’.

Yet, Gins’s achievement as an experimental writer was enormous. Distinct from her artistic and architectural collaborations with Arakawa, her writings provide a vital terminological and metaphysical influence, particularly as they comment relentlessly upon acts of perception. It is not possible to state with certainty whether some or all of the words that appear in Arakawa’s paintings were contributed by Gins, but it makes sense to open the door to such an interpretation. WORD RAIN introduces notions about the interrelation between language and sensation that are taken up again in Helen Keller or Arakawa with new emphasis on the possibility of mapping experience by means other than hearing and sight. This transition – from exploring the interrelated acts of writing and reading in WORD RAIN to asserting how the world can be differently perceived and, therefore, inhabited, in Helen Keller or Arakawa – is key to Gins’s participation in the Reversible Destiny project, as well as to her earlier collaboration with Arakawa on ‘The Mechanism of Meaning’. Gins reimagined the English sentence to enact a way of perceiving the world that would challenge the perceiver, helping them to evade the enervating sensory and spatial habits of contemporary life. She saw the sentence as at once spatial, temporal and shot through with servers (i.e. words).

Link to the article.

This article appears in the print edition of frieze, May 2018, issue 195, with the title "Visionary Cybernetics." 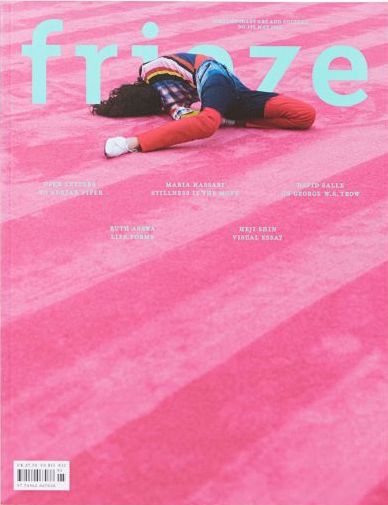 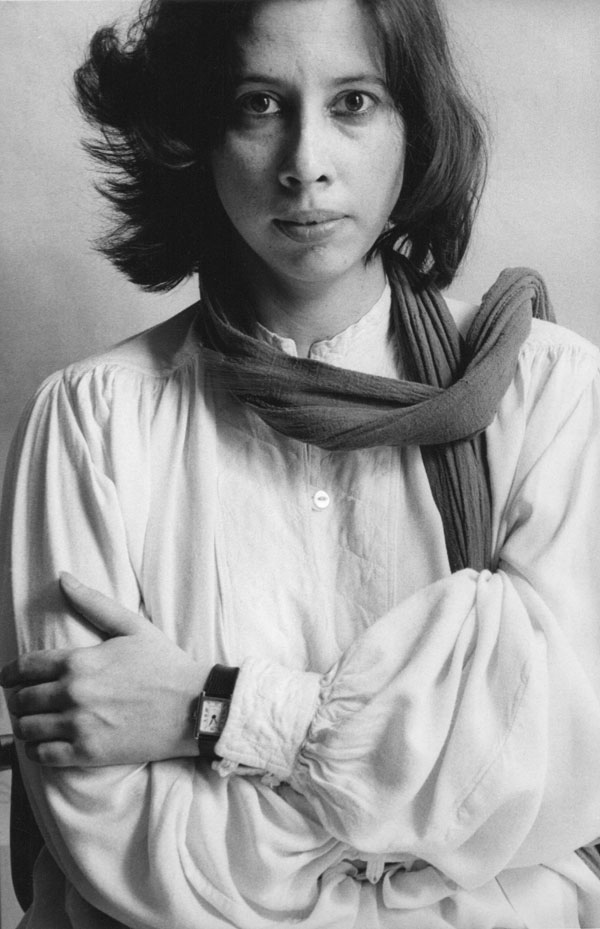 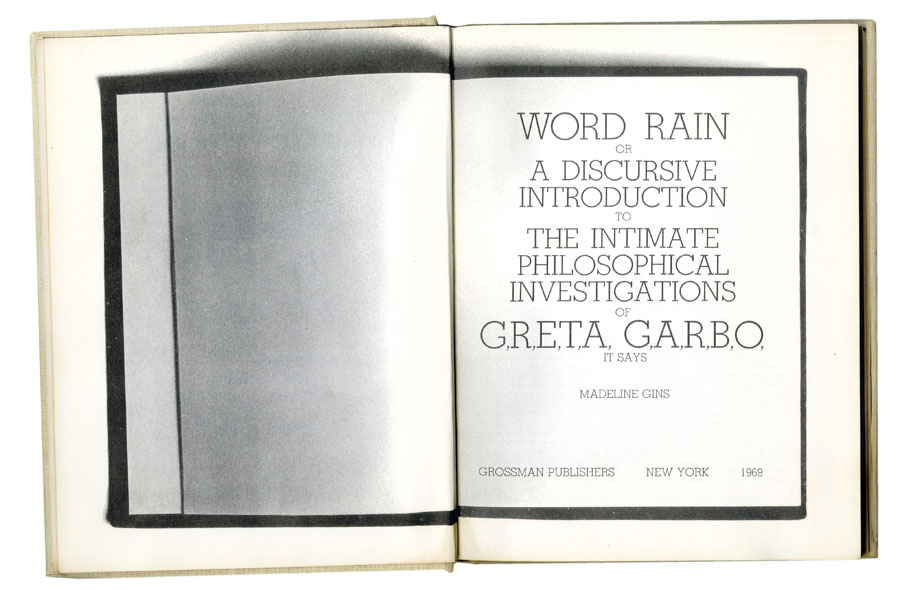 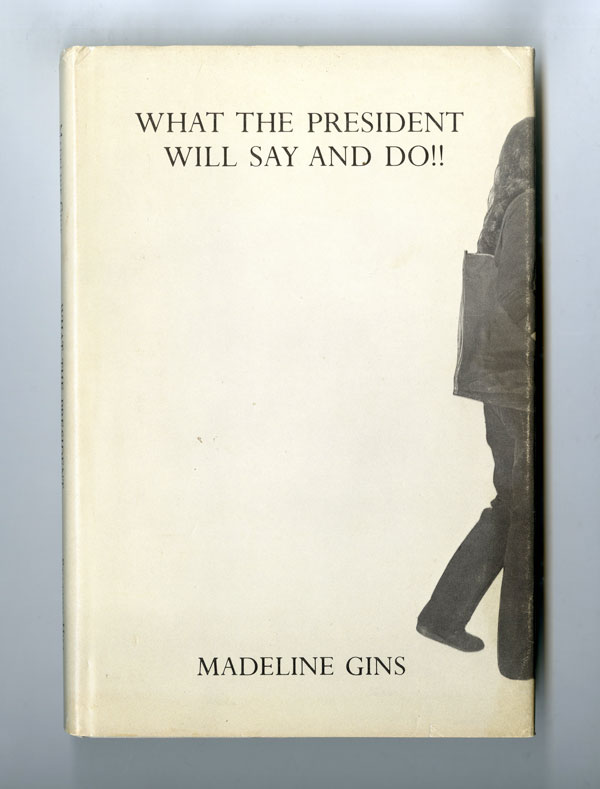 Madeline Gins, What the President Will Say and Do!!, 1984, Station Hill Press, New York.