From the Latin ambitiō, by way of the Old French, across the Channel and the centuries through the Middle English, and finally to the modern day, comes to our protean patois that pleasant, well-groomed word ambition. To us, it is an unassuming noun, unusually simple, for English, to both pronounce and spell, invoking affirmation of hard work and do-goodness. In the days of the Republic, however, when would-be Senators canvassed Rome for votes before a certain Caesar put an end to all that democratic silliness, there was a downside to future ambition, negative connotations that stuck with it through Milton’s misplaced Paradiso and Dickensian London, when to be “ambitious” was something of an insult. All those high-minded orphans, looking to get ahead. And although that definition has fallen by the wayside in our historically-adverse age, within the literary world ambition, it seems, has rediscovered its devilish ways. To hear it from Goodreads reviews and Twitter rants, “ambitious” novels are far too self-involved, too concerned with their accomplishments and achievements—to say nothing of those who write them. The ambitious is, once again, persona non grata. It is into this monotone whirlwind that the endlessly inventive Lucy Ives launches her latest novel, among the most audacious, effective, and ambitious books of recent vintage, Life Is Everywhere.

The top line descriptor of the book is that it is a systems novel, the death of which has been much exaggerated of late, one that takes on the beastly word of academia. Erin Adamo is a Ph.D. candidate at one of those prestigious Manhattanite universities that lend themselves so well to novels, possessed of a fine literary mind, an imploding marriage, taxing parents, and an apartment for which she has no key. Through this stressed out graduate, Ives refracts a novel of multitudinous brilliance and luminosity, hammering away at convention and the well-trod path with the confidence and skill of an accomplished, fearless writer. It is a credit to both her vision and her publisher’s constitution that Life Is Everywhere, as wide-ranging and risk-taking a novel to be found this side of Infinite Jest, never once feels restrained or neutered.

Ives signals her intention in the opening ten pages, which marks the absolute last instance when Life Is Everywhere may be said to adhere to writing workshop life lessons. Our energetic and polymath narrative entity, who is in for quite the workload over the succeeding 400 pages, begins with a lively history of botulism. Across an approximate millennia and about eleven fields of scholarship, the narration speeds through the Black Death and botox to arrive in a graduate seminar, chairs arranged in a neat socratic semicircle, crash landing into the consciousness of a professor:

Meanwhile, the beings on earth most affected by botulism are not humans but rather waterfowl, which die at a rate of some ten to one hundred thousand per year. Special conditions are needed for the bacteria to produce spores and, thus, the toxin: warmth, protein, an anaerobic environment, wetness. Plant matter and invertebrate animals decomposing along the surface of a lake in sun meet these criteria. They are feasted upon by ignorant birdlife.

But the lives and/or corpses of herons and/or loons were not of particular interest to Faith Ewer. Neither a birder nor a twitcher was she, nor did she particularly enjoy leaving the limits of New York City, except by way of the major airport named for a dead president, and, then, only really—or, really only—to travel the francophone world, but mostly and usually to France itself, where she felt herself alluringly anonymous as well as just foreign enough to keep things stimulating. She was what is termed an expert, and this had the effect of making her, at least in her own imagination, a spy. There was tension in her back, near the neck and shoulders, and stale air in the room.

While the quote does little justice, especially given the effect the weight the preceding ten pages have on the reader, the passage is nonetheless an excellent example of Ives’ movement skills, which are on display throughout. Her third-person narration commands the universe of the book—a key element of any systems novel—without the slightest hesitation or uncertainty, guiding the reader along as if it was her own life, connections drawn along interior lines and misplaced notes.

Erin, whom we rather obliquely meet on her way out the door, leaves her campus after class to dine with her parents and bear witness to the final implosion of her domestic life. In her bag are three documents—a monograph by a professor in her department flanked by two manuscripts of her own—which, in a rather clever laying bare the device, gives Ives her opening. In the spirit of completeness, not to mention adherence to the literary traditions in which she writes, Ives reproduces in full these works, showing her impressive range and the depth of her fictive world. There is indeed no lack of audacity here.

As is true with all systems novels—or, in James Wood’s rather more alluring phrase, hysterical realism—there will be elements of Life Is Everywhere that appeal more to some readers than to others. Ives spares nothing in her examination of Erin’s school bag, chasing oblique theories about obscure French writers to and through their logical endpoints. But the novel is a crafted work of art, a universe of creation that boasts nothing if not confidence and unity of vision. In this sense Life Is Everywhere is a total success, an achievement of its artistic goals made all the more impressive by the loftiness of those aims.

As with all novels, even those on the biggest scales, it is on the sentence level that the war is won, plot-length battles notwithstanding. Ives’s vision is grand and well-executed but it is her technical-mechanical skill that brings everything together. Erin, on the street now, thinks back to an incident the week prior when she was nearly hit by a bus. She recalls how she’d seen a flashing movie of her life passing before her mind’s eye:

The first thing on the screen was Ben’s face. His fucked-up face. Apparently the movie ran in reverse. But, then again, Erin wasn’t actually dying, so it made sense that whatever vision this semi-near-death experience inspired, it was basically an exploration of subjects of current concern, not the great existential themes. Thus: Ben’s face. There it was, and the long bus flowed by, bopping to a standstill.

Ben was her husband.

The movement between Erin’s inner life and speech and the narrative entity’s recognizably slanted stage direction is precise, crafting a bleeding of the two that welds our heroine to her outsized plot. As large and hysterical as Ives’s fictive world may become, it is her mechanics that prevent the reader from ever losing sight of the human element, binding her audience fast to Erin’s fate in this wonderfully bizarre New York evening. Life Is Everywhere is a remarkable, refreshing book, one that offers a reminder of how bold fiction can be, how effectively the novel's form can capture life and its endless absurdities when brought together in unchecked artistic ambition. 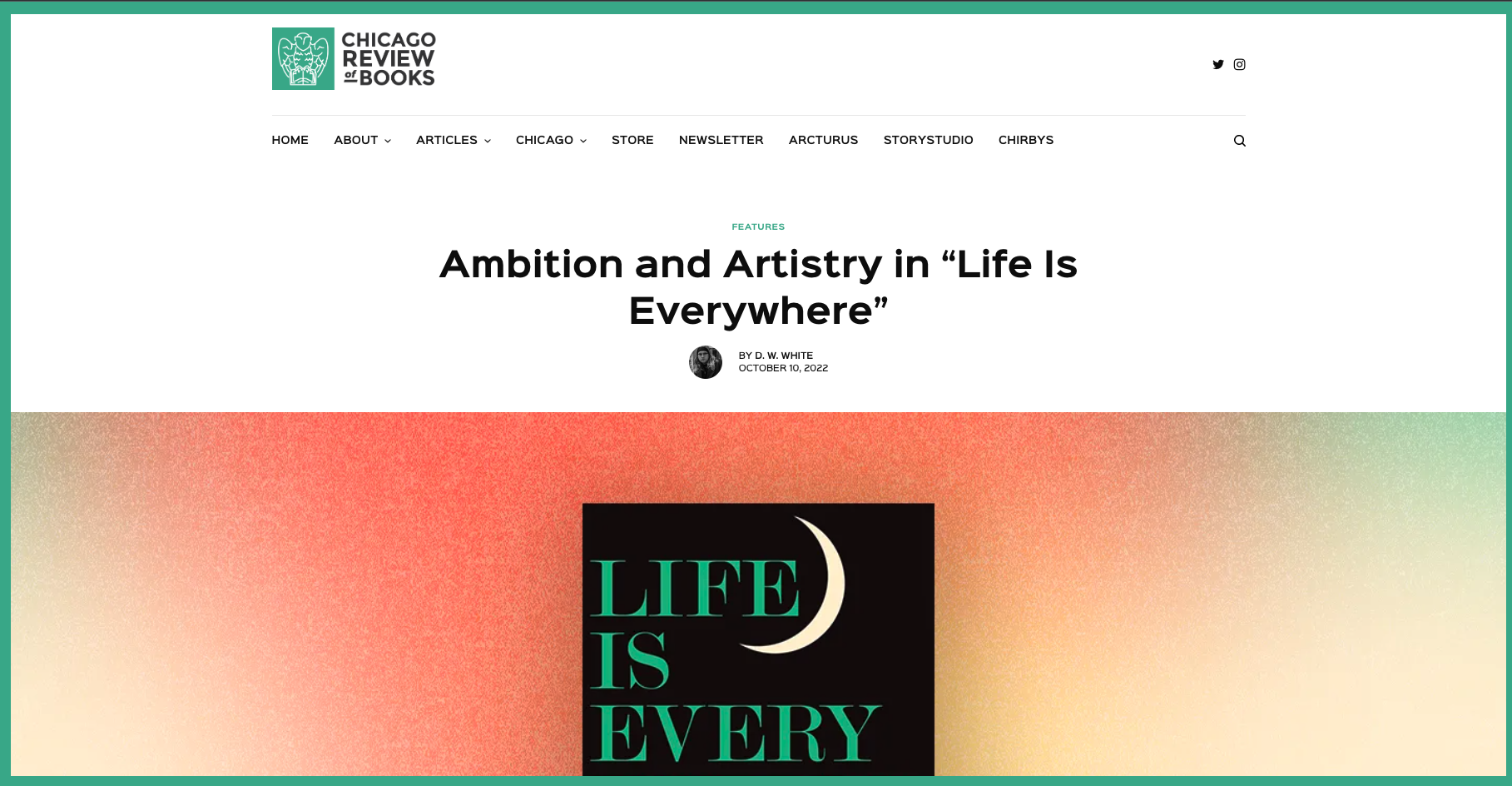