MY MOTHER, THE METROPOLITAN MUSEUM, AND I

I recall, as a girl of eight or nine, discovering a photograph of my mother taken a few years before I was born. In the image, my mother stands in a white room. She is laughing as I had never seen her laugh in life, completely taken by elation. Surrounding her are large-format photographs, presumably waiting to be hung on the walls. Some are still wrapped in paper, but two—showing beautiful women—are visible. One of the women is also laughing, almost as much as my mother. I later learned that this long-haired, gently disheveled, smoking and ring-wearing figure was the singer Janis Joplin—although for now she was just an anonymous subject who reminded me a little of myself. When I brought the picture to my mom, she told me that the photographs were by a man named Richard Avedon. In 1978 Avedon, a.k.a.“Dick,” had a retrospective at the Metropolitan Museum of Art, where my mother worked as a curator.

This was a standard mother-daughter conversation. There were many unusual objects in our Upper East Side apartment, and I was a wily sleuth. I was even beginning to believe—knowing nothing of the cost of child care—that my mother’s reason for sometimes bringing me with her to her office after school was that she wanted my assistance. We traveled, hand in hand, from the neighborhood’s upper reaches to Fifth Avenue and the Met’s imposing neoclassical façade. As we ascended the steps together, I believed that the building belonged to us. Only we knew about the unfinished blocks at the tops of the grand columns—meant to become figures personifying the four great periods of art, from Ancient to Modern, but never carved. This was the power of the museum: It could hide a flaw in plain sight and look magnificent while doing so.

My mother and I proudly entered, making our way to my mother’s department. She was a specialist in European drawings and prints, and her office was accessible via a secret door in the wall of one of the galleries, which she opened using a key, often in full sight of gawking tourists. We’d pass through a study room, into the haven of my mother’s private work space.

The smell was of ancient papers, leather, inks, and resins. I did homework or looked through my mother’s collection of antique doorknobs, keys, and keyhole covers. She liked to purchase these odds and ends at European flea markets. I had no idea what they meant to her.

Later, museum closed and workday done, we exited the departmental warren and descended through the empty, darkened building. We passed shadowy busts and portraits, obscure arms and armor, sacred objects visible only in outline. These walks, sometimes up or down staircases inaccessible to the public, would reappear in my dreams. Sometimes it would be impossible to find my way out of the museum; or a work of art might come, disconcertingly and messily, to life. In reality, we always reached an exit without incident. In one subterranean storage hall, passing a giant two-dimensional reproduction of a blue hippopotamus sculpture from ancient Egypt nicknamed “William” by the staff, we’d even salute. My mother’s heels clicked reassuringly. This was her place.

These are my most vivid childhood memories. Of course, there were privileges: an early viewing of the immense Christmas tree along with the intricate, miniature crèche, put out every year without fail in the medieval hall; my mother’s ability to give the occasional tour to my grade-school class, an event that filled me with pride. However, it was the incidental things I cherished: eating lunch in the staff cafeteria, looking through my mother’s suitcase after she’d come home from a business trip. These moments impressed upon me the dignity and solace of work. The institution encompassed my mother; it seemed to support her at every turn.

Dinner conversation with my father revealed a different side of the job: other people. There was the macho curator who always had to get his way, flaunting the economic superiority of his specialty and mocking my mother’s lowly prints and illustrated books. There were also regular updates on Brooke Astor, the late heiress, with whom my mother lunched from time to time—and here the tone of the report shifted. Mrs. Astor was extraordinary; the chauvinist was forgotten amid reflections about Mrs. Astor’s palatial apartment, the pleasantness of her conversation. Sometimes celebrities appeared, requesting tours. There was the week of Brad Pitt. Despite repeated entreaties, all my mother would say was that he seemed “attentive.”

I knew from the Avedon installation picture that my mother’s life at the museum had been different before my time, maybe more surprising. It was, after all, her first big job. She’d fled a difficult family situation in San Diego and taken a master’s in art history at Columbia. Here she’d met my father, who was studying law and had previously worked construction on the side. They’d made a go of it. My mother changed her first name as well as her last in marriage, and my father left behind Yonkers and his working-class roots. My mother had the physical gifts that permit self-transformation: She was slender, with sweet, symmetrical features and beguiling brown eyes. She made powerful friends, including the philanthropist Lincoln Kir­stein, and rose quickly through the ranks at the Met, becoming the director of her department. She met Andy Warhol.

“But what was Andy like?” I demanded to know. I was a teenager now, and the 1990s had brought renewed hunger for Warhol’s commodified irony. Even Kurt Cobain seemed to be modeling himself on the Factory magus.

By this time, my mother and I disagreed on many topics. Not least among these was my appearance. All my clothing was deemed too tight. My eye makeup was eternally inappropriate, what my mother termed “your Cleopatra eyes,” a mild dig I tried to take as a compliment, given the Met’s spectacular Egyptian collection. Meanwhile, I was athletic, verging on Amazonian, or so I felt. By age twelve, I was already passing my mother in height. I played three sports. My face came from my father. His Assyrian-Iranian and Polish features—dark hair, broad face, pronounced nose—had won out over Mom’s German-WASP blend. In spite of my apparently British last name—in fact an Ellis Island corruption of my paternal grandfather’s Ivas—everyone assumed I was of Eastern European descent and Jewish. Among friends’ families I usually smoothed over any confusion by preemptively proclaiming that I had no religious education at all, which was true.

Only later did I understand how fully one can reinvent oneself in New York City, particularly with a good partner in metamorphosis, as it were. In my mother’s case, I was never entirely sure if that partner was my father or the museum itself, which during certain periods seemed to consume her whole each morning, spitting her out again, mysteriously transformed, at nightfall. I continued to grow away from her, at first physically, then creatively. I became obsessed with drawing, a pursuit my mother discouraged vehemently when a high school teacher suggested I apply to art school. I would go often to the museum on Friday afternoons to work on my sketches. I no longer bothered to venture up to my mother’s office; I came alone and sat alone and left without her.

After I was accepted at Harvard, the polar opposite of art school, my mother began taking me with her on research trips, perhaps because I was a good sounding board or perhaps to keep an eye on me. We went to London, Paris, Australia, and French Polynesia. Our last trip, an inquiry into Paul Gauguin’s final days on the remote island of Hiva Oa, was challenging. I was tailed by wild dogs when I foolishly attempted to visit the artist’s grave alone, and my mother came close to drowning. This episode took place on a volcanic beach, where we were walking. I don’t know why my mother decided to swim, but swim she did, and was caught in a rip current. Our host, Monsieur Gaby, and I stood on the shore, watching with mounting horror. “Swim to the side!” Gaby yelled, probably in French. Eventually all was well, but in that petrifying moment I saw clearly and for the first time the distance between my mother and me. It wasn’t just the fast-moving ocean.

Later, after my mother had staggered back to land, we all stood staring at one another. I felt as if I was meeting her for the first time. Gaby, meanwhile, seemed ready to depart. We piled into his SUV. As the vehicle bounded up the lush mountainside, I reflected on what an odd couple we must appear: the brooding daughter wandering off into an overgrown cemetery; the sociable mother nearly swept out to sea. Or perhaps we were not so much “odd” as inverses, I thought, mirror images.

But what a strange and difficult mirror it was.

Link to the essay.
This essay appears in the print edition of Vogue, June 2017, with the title "Her Brilliant Career."
See PDF below. 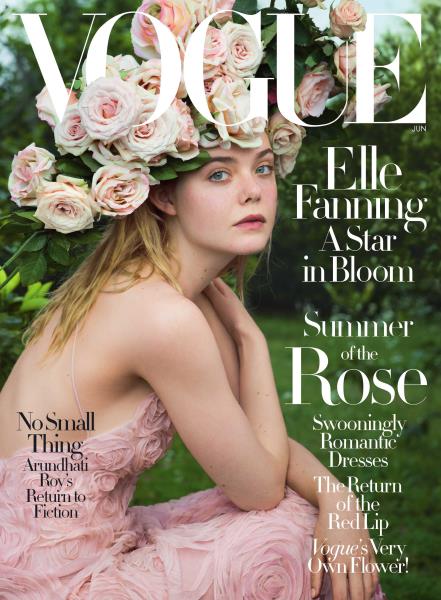 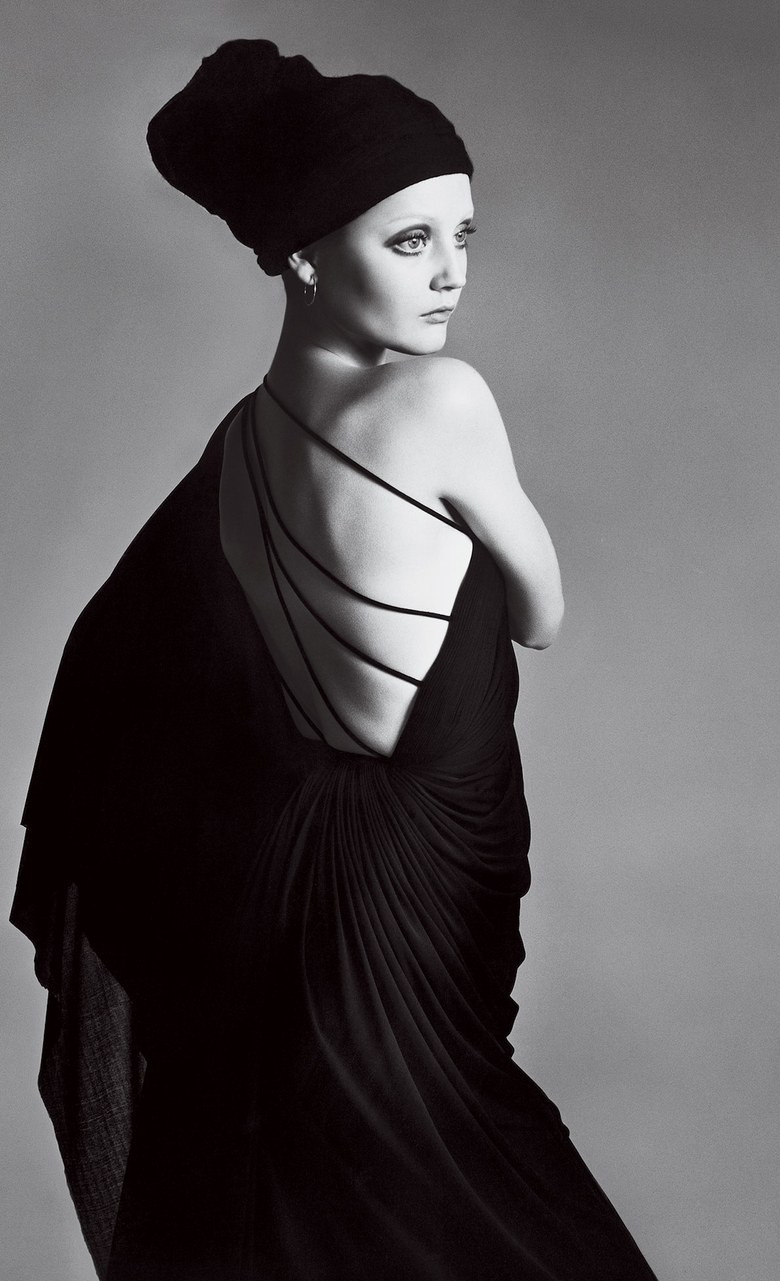 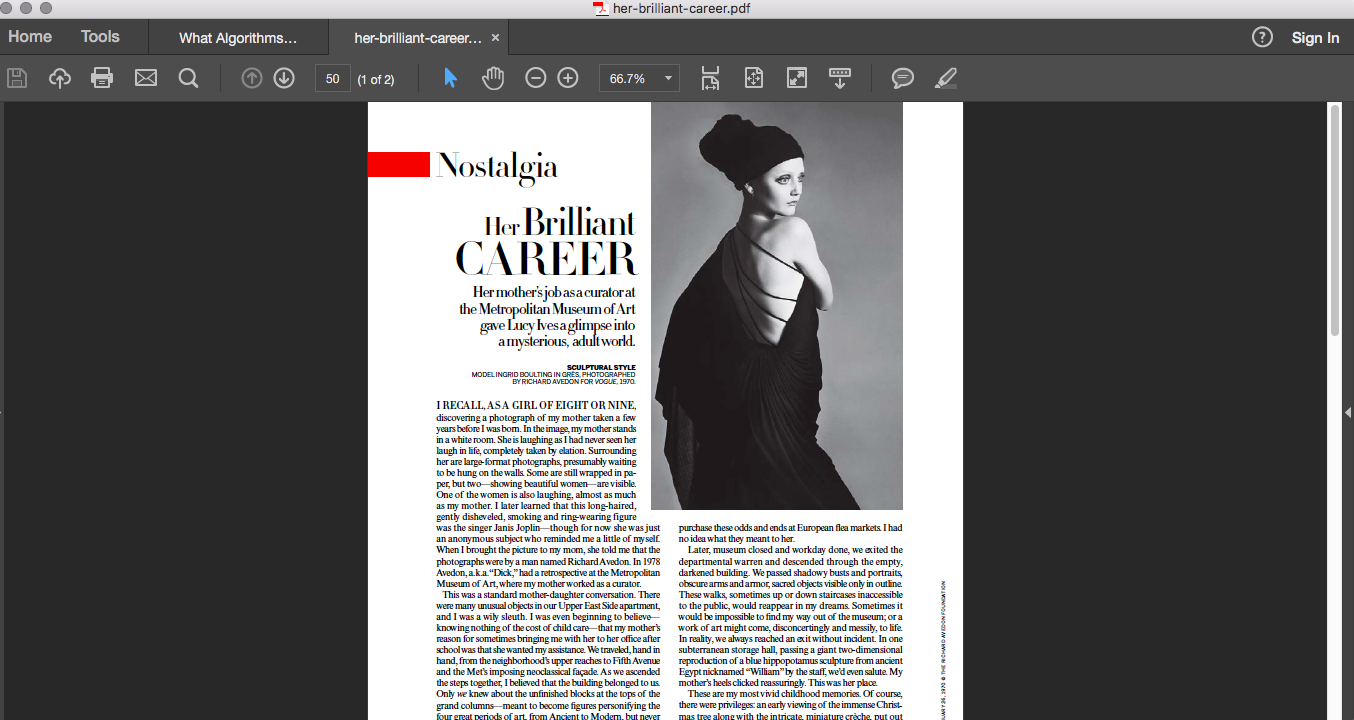