THE SADDEST THING IS THAT I HAVE HAD TO USE WORDS: A MADELINE GINS READER

Poet, philosopher, architect and transdisciplinary artist, Madeline Gins (1941–2014) is well known for her collaborations with her husband, the artist Arakawa, on the experimental architectural project Reversible Destiny, via which they sought to arrest mortality by transforming the built environment. Yet, her own writings—in the form of poetry, essays, experimental prose, and philosophical inquiries—represent her most visionary and transformative work. Expansive and playful, Gins’s vigorous and often ecstatic exploration of the physicality of language challenges us to sense more acutely the ways in which we can—and could—write and read. Like Gertrude Stein before her, Gins transfigures grammar and liberates words. Like her contemporaries in conceptual art, her writing is attuned to the energized, collaborative space between reader and page. She invites the reader into a field of infinite, ever-multiplying possibility.

This revelatory anthology, edited and with an introduction by the writer and critic Lucy Ives, brings never-before-published poems and essays together with a complete facsimile reproduction of Gins’s 1969 masterpiece, WORD RAIN (or A Discursive Introduction to the Intimate Philosophical Investigations of G,R,E,T,A, G,A,R,B,O, It Says), along with substantial excerpts from her two later books What the President Will Say and Do!! (1984) and Helen Keller or Arakawa (1994). Long out of print or unpublished, Gins’s poems and prose form a powerful corpus of experimental literature, one which is sure to upend existing narratives of American poetics at the close of the twentieth century.

Poems by Gins at the Poetry Foundation, with a short introduction

Interview in The Believer

Introduction excerpt at Art in America

Reading and Conversation at the Brooklyn Institute for Social Research

Sigilo’s Reader provides access to Gins’s major texts, all of which would be currently unavailable otherwise. Lucky for readers, Ives selects a comprehensive array of works: from the 1960s and ’70s, 27 pages of unpublished poems as well as two essays; a complete facsimile reproduction of Gins’s 1969 experimental novel WORD RAIN; and selections from her two other notable book-length works, What the President Will Say and Do!! (1984) and Helen Keller or Arakawa (1994). Ives terms WORD RAIN a “carefully calibrated and constructed artist’s book, as well as a comment on the novel form,” and asserts that it is “Gins’s most brilliant endeavor and among the most significant works of experimental prose of the second half of the twentieth century.” This is not a hyperbolic assessment — the Reader ought to provoke a revision not only of Gins’s legacy as Arakawa’s collaborator, but of the wherefores and why’s of experimental writing — of its capacity to say and do what other forms of writing or art-making cannot.

In these uncertain times of social isolation, when many of us will spend more time with a book, Gins’s writing captures what we crave from that experience—one that is physically and mentally all-encompassing. While The Reversible Destiny Project may not have succeeded in giving Gins or her partner eternal life, The Madeline Gins Reader does. With each reading we embody her words and write Gins anew, giving her life within the pages of the book and ourselves.

The Saddest Thing Is That I Have Had to Use Words: A Madeline Gins Reader, a startling collection of essays, novels, artist books, and poems, edited by Lucy Ives, makes clear that Gins didn’t go for rote lyrical (or anti-lyrical) celebrations of language or comforting social narratives, but had more pressing goals. Employing a language equal parts phenomenology and microbiology, domestic-architectural intimacy and linguistic voracity, Gins’s literary ambition was nothing short of immunity.

This wide-ranging, energetic anthology of poetry and experimental fiction, with an authoritative introduction by Ives shows how Gins (1941–2014) explored the possibilities of literary form and its relationship to content. ... Stimulating and consistently surprising, this is a treat for those interested in interdisciplinary artists.

For Gins, words are nothing if not physical. It’s their physicality that protects them from perfect comprehension — in the scanned pages making up WORD RAIN, stray digits appear to block out words; in poems, words and lists are emphatically crossed out, smudged, erased. The inherent confusion of language is of course her tactic, for to reach full clarity is to resume gravity. And that’s why experiencing Gins’s writing in print — at long last — is so necessary. The Madeline Gins Reader feels like how I imagine living in a Reversible Destiny house feels — like floating, like hovering, really, in a cloud of mist. While stuck inside your familiar four walls, lockdown is the perfect time to dive in.

Gins was a master of wordplay; humorous images are built up into piles, with groups of phrases building into networks of meaning flowing in gradients down the page.

[T]hroughout The Saddest Thing, Gins’s written language—especially in its formal arrangements—knows what it’s for. It’s a self-reflexive tool, one aware of its patterns and actions and how these patterns and actions might be described and quantified, kind of like an excited kid typing up directions for how to use the typewriter on the typewriter, nomenclature cards sliding off with every release of the carriage.

For anyone who wants to experience directly the uncharted regions of inner and outer space in which language, perception, thought, and image play freely with our cramped expectations of them, the Madeline Gins Reader is an indispensable guide and a startling discovery. Her explorations of the interstices between words as symbols, as images, as sounds, as drawings are sure, steady, and entirely original. There are pleasant surprises on every page, in which narratives open up to encompass your experience as reader; fold over on one another to include and picture her activity as author; break open to scatter into lists, logical formulae, diagrams; reconfigure our grasp of what a page is for and what it can do. It is a dizzying and deeply exhilarating ride. Madeline Gins was a pioneer of language, poetry, and Conceptual art. It seems incredible that her work received so little attention during her lifetime. This volume performs an invaluable service in recalling her to our attention.

Madeline Gins was marooned here, on Earth, and made the best of it, using what was available to her, like words. This book is a splendid testament to how far she pushed them, and us, to realize what she already knew. That this, all this, is not it. Not. Even. Close.

Gins was a foundational figure. Her work was original and yet also deeply indicative of the transformative activities of conceptualism that performed a tectonic shift in art-making beginning in the late 1960s. These brilliant essays, the incredible novel/artist’s book WORD RAIN, the poems, projects, and thoughts have all been scattered, unavailable, or out of print. Ives frames the collection articulately, giving us a vivid sense of the period in which Gins began and developed her remarkable body of work. This is a welcome publication that will renew our appreciation of Gins’s intellect and wit.

MADELINE GINS was an American poet and novelist, artist, philosopher, and speculative architect. Born in the Bronx, NY in 1941, she grew up on Long Island and graduated from Barnard College in 1962, having studied physics and philosophy. Gins was the author of three full-length collections: the artist’s novel WORD RAIN (or A Discursive Introduction to the Intimate Philosophical Investigations of G,R,E,T,A, G,A,R,B,O, It Says), What The President Will Say and Do!!, and Helen Keller or Arakawa. Alongside her own writing practice, Gins also collaborated with her husband Arakawa on a theory of “procedural architecture,” an endeavor to create buildings and environments that would prevent human death. Arakawa + Gins’s Reversible Destiny project realized five built works in the United States and Japan, and before her death in 2014, Gins independently designed a staircase in the Dover Street Market in New York City for Rei Kawakubo of Comme des Garçons. Long a resident of New York City, Gins participated in experimental artistic and literary movements of the 1960s and ’70s before developing a collaborative practice as a philosopher and architect. She leaves a rich and complex legacy of interdisciplinary thought, action, and writing: although much of her work was unpublished or went out of print in her own lifetime, her prescient efforts in poetics, aesthetics, and environmental studies are central to contemporary debates about how to form communities and create collaboratively and sustainably. 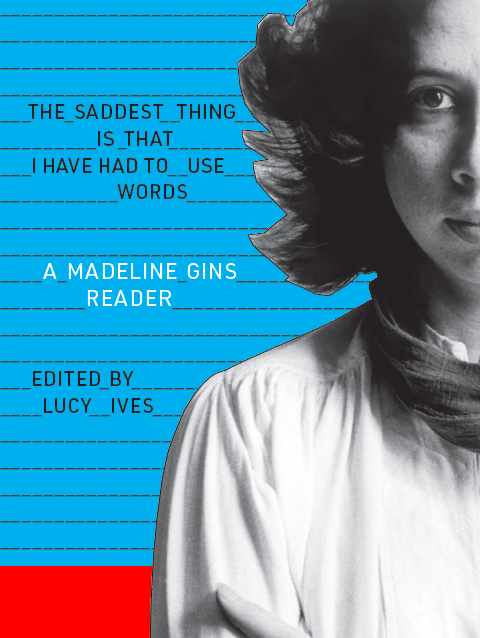 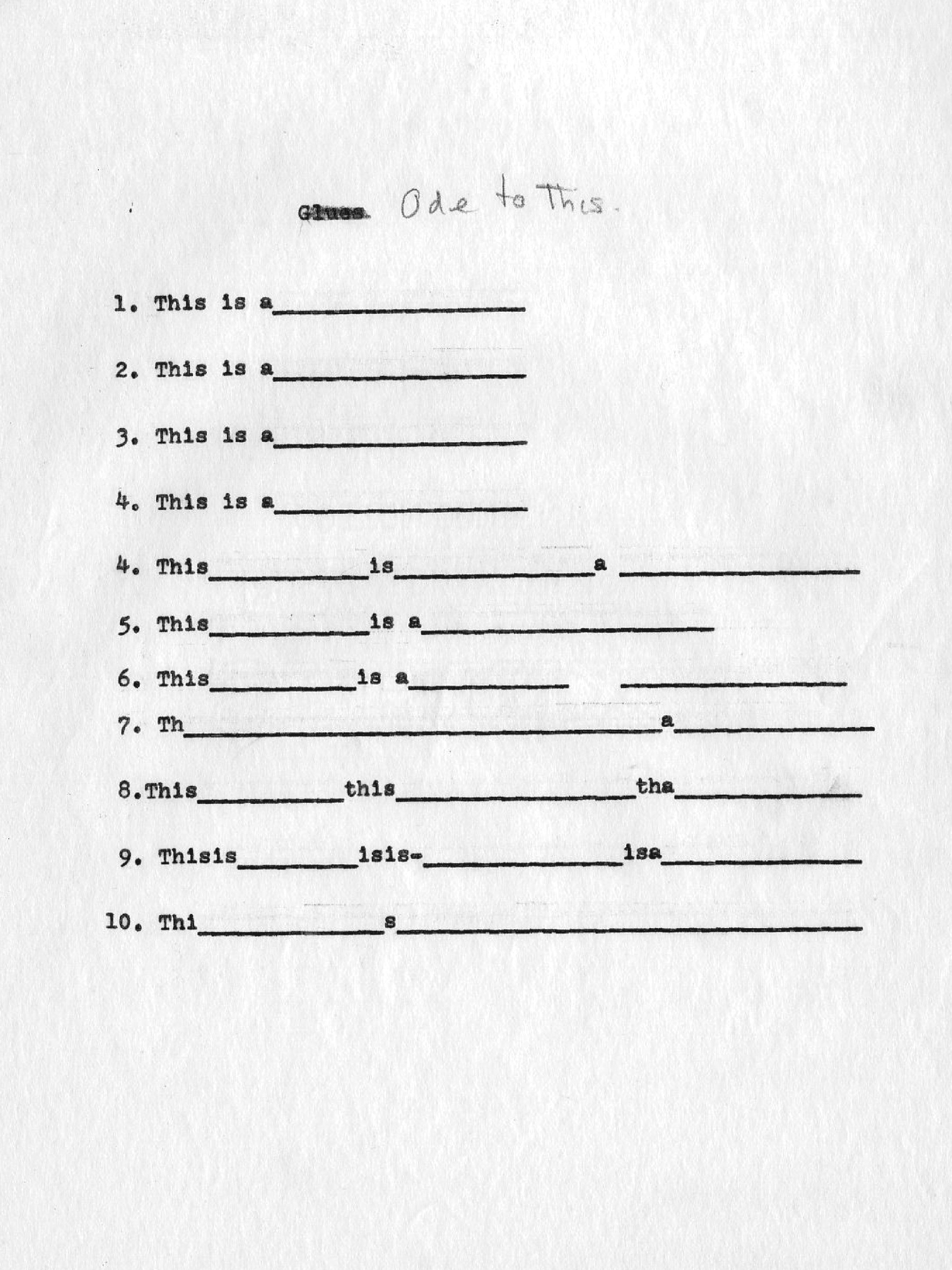 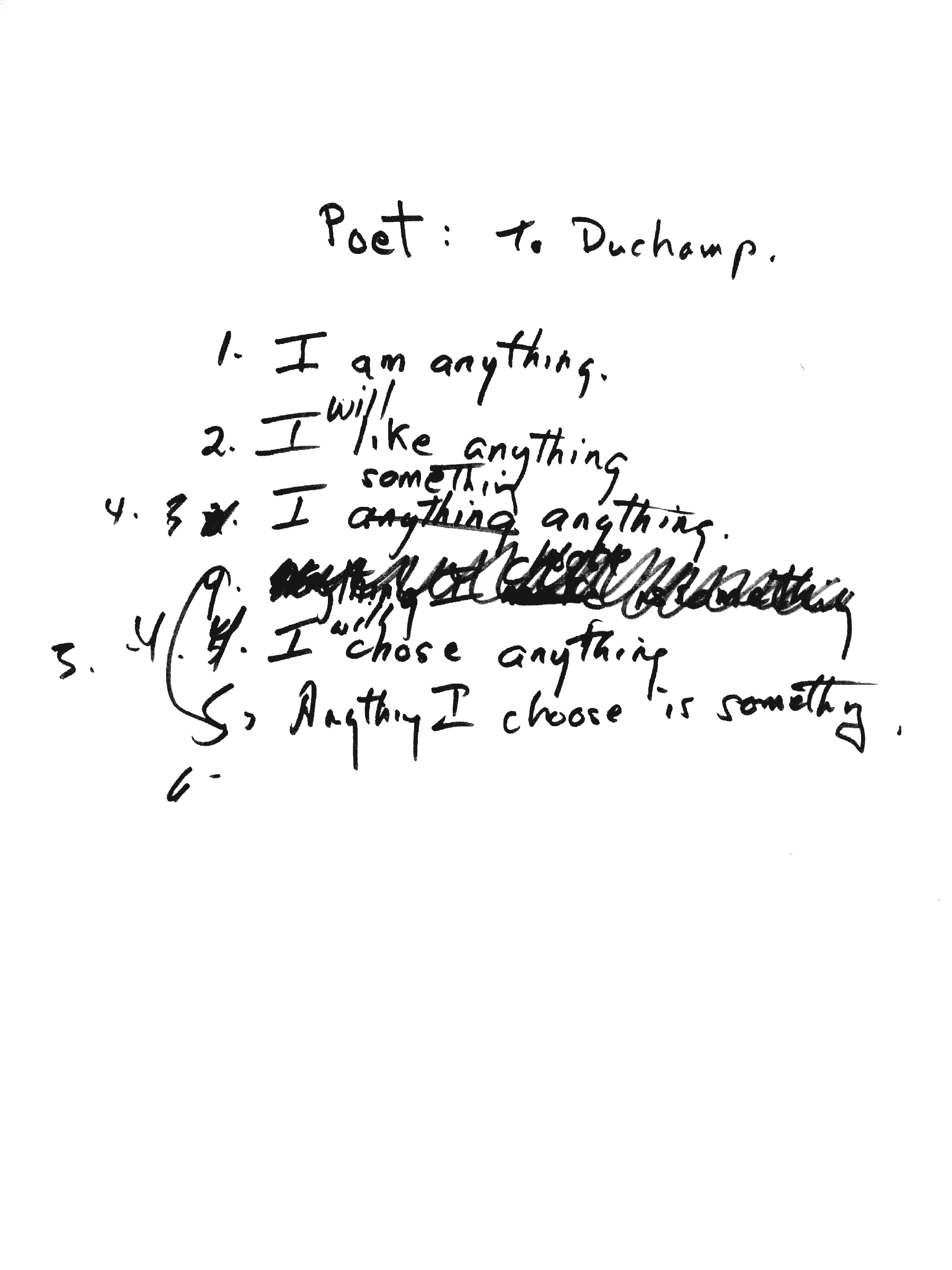