A NOTE ON VANITAS

The driver exited his vehicle to take a selfie with the animals.
—Wikipedia, “List of selfie-related injuries and deaths"

Is all still vanity? Four hundred years ago, Dutch and Flemish painters produced hyperrealist still lifes of flowers, food, and luxury goods, seemingly fixing these gauds beyond time. So-called Vanitas images symbolize the brevity of human life, as well as the ephemerality and essential emptiness of earthly pursuits. Paradoxically, the Vanitas image also boastfully advertises the artist’s “ability to give permanence to the ephemeral and thereby overcome death,” according to historian Sybille Ebert-Schifferer. This tantalizing tension between human mortality and human ambition maintains today: High-net-worth individuals spend ever more in hopes of liberating their physical selves from senescence and death, while the rest of us obsessively save our memories to the cloud, convinced that the digital records that compose us will act as viable substitutes after we are dead. Meanwhile, the online graveyard grows. For example, the number of deceased individuals with Facebook profiles increases by an estimated 8,000 “users” per day, suggesting that our attempts to memorialize everyone and everything may mainly recall the fragility and brevity of life. Just as the Vanitas—also known as the pronkstilleven, or luxury still life, for its shiny and expensive contents—reminded wealthy patrons of their own earthly impermanence, we now negotiate a world of images that confusingly express our time’s extreme finitude (global warming, resource wars, economic stratification) even as they promise escape and immortality (life extension, quantum computing, planetary colonization).

In its earliest appearances in the English language, “vanity” flags the transitory nature of the human body, as well as the essential bootlessness of corporeal whim. Derived from a Latin root meaning “empty, void,” vanity is a paradoxical and sometimes dangerous way of relating to the self: To be vain is to mistake the changeable for the permanent, to love an image in the place of embodied presence, as the drowning victim Narcissus did in myth. Vanity is a conceptual error at once semantic and ontological, in which an item belonging to one category (the body) is presented as if it belongs to another (the numinous). Vanity may be the category mistake to end all category mistakes, a tragic misapprehension that is, all the same, associated with a non-negligible supply of pleasure and fun. Indeed, vanity often assists in crucial ways in our identification and interpretation of value, particularly when it comes to those endlessly seductive, sometimes troubling, sometimes anodyne items: art objects and luxury goods. Though we should perhaps know better, we hope that new purchases and proximity to beautiful, costly things will bring us increased vitality.

In this sense, little has changed since the 1600s, when opulent still-life paintings repurposed the failure to fully recognize our mortality as subject matter. Roland Barthes remarks on the seductive “sheen” of these meticulous and costly renderings of tables piled with wet grapes, split peaches, and shimmering oysters, which symbolize pleasures of fleshly existence; and the occasional leering skull or recently snuffed candle, which symbolize frailty and death. He reads the precise detail of these images as not merely allegorical, but expressive of a drive on the part of the artist to imprint one’s mark “upon the inert by shaping and manipulating it.” The art historian Svetlana Alpers, meanwhile, observes the remarkable “attentiveness” shown to the things of the pronkstilleven, whose astonishing realism suggests that they may also be visual documents of a new and modern style of looking, proofs of an emerging empiricism; soon artists might not merely paint nature but influence it.

As Barthes and Alpers note, the author of the Vanitas painting always seems just about to step into the image, to seize an oyster or disturb a precarious table setting. In Jacques de Gheyn II’s 1603 Vanitas Still Life, a massive hovering bubble threatens either to burst, ruining the composition, or to reflect the curved image of the artist himself, thereby interrupting the illusion of this apparently perfectly impersonal representation. The skill necessary to convey this opposition—between the ephemerality of experience and the overwhelming sensual presence of the physical world—ups the ante: The effort lavished on the delicate, shining surfaces implies that the painter may not believe in his own fleeting nature so much as his vicarious immortality, as guaranteed by the liveliness of the very work he was engaged in painting. The eternal present of the Vanitas image is animated not merely by the voluptuous objects it contains but by the illusion of an eternally living artist, who forever seems to hover just beyond the frame.

What is vanity now, and does it equate with mere selfishness or indicate a more complex balance of rational belief and carnal experience? Cryogenics labs offer to reanimate us into a future of improved technology. Luxury spas promise the approximation of youth. Google’s (a.k.a. Alphabet’s) Calico biotechnology arm will leverage the power of nature to extend life. These endeavors—often described in terms of service, even obligation, to the entire life-loving species—are buttressed by antiaging researchers who seem driven to prove that the more privileged among us are in fact no longer absolutely mortal. At the same time, we must reckon with the fact that, for the foreseeable future, we’ll all age and eventually pass away, particularly since senescence and death are not just emotionally but monetarily involved processes. The populations of many countries are disproportionately aged and aging, which poses challenges to the configuration of cities and economies (as well as questions about representation and inclusion); collective resources are already being strained, even as wealth is distributed with an unevenness that rivals the early nineteenth century—a statistic that becomes more disturbing the longer one ponders it.

The ways in which we recognize and deny death are embodied in the material things with which we surround ourselves. The drive to collect, categorize, and archive is one response to the uncertainty of mortality, and today’s ever-expanding capacities for digital storage encourage the endless memorialization of oneself and loved ones. The permanence or impermanence of such traces, which depend on the viability of servers and compatibility of files, software, and hardware, is debatable; indeed, the update could be the double-edged sword upon which our digital identities fall. Yet perhaps posterity is of lesser consequence to us than it once was. We are able to document our lives with unprecedented speed and medial diversity and produce endless streams of selfies and video testimonies for the “here” and “now.” If most of our content is addressed exclusively to the immediate present, perhaps we have begun to dispense with the notion of posterity at the very moment at which we are, at least in theory, able to save everything. In this case, it is not merely our conception of mortality that has been destabilized, but also our sense of time, in that we have begun to favor ephemerality and inhabit the present—on Snapchat and beyond—in new ways.

This issue of Triple Canopy features artists, writers, and critics who are thinking and working in the midst of these paradoxes. They reflect on a wide range of topics, from the unstable glamour of K-pop to the collective process of aging in naturally occurring retirement communities (NORCs), from the deadly force deployed by the American police to the consolations of the recovery of one Los Angeles artist’s cenotaph-like home, from the antideath architecture of Arakawa and Gins to multiple contemporary interpretations of the Vanitas image tradition, from the much-heralded “end of death” to the pursuit of impossible—or nearly impossible—forms of beauty. The futility of human striving meets the plenitude of digital memory, and acts of self-representation contrast with attempts to comprehend the situation of the human species, prompting us to ask: Does death still define life as the “vanity of all vanities,” as Ecclesiastes has it, if death is also a highly remunerative field of scientific research and product development? How will solutions to the perceived problem of mortality be shared out, fairly or otherwise? What framing device will replace the all-comprehending selfie stick? 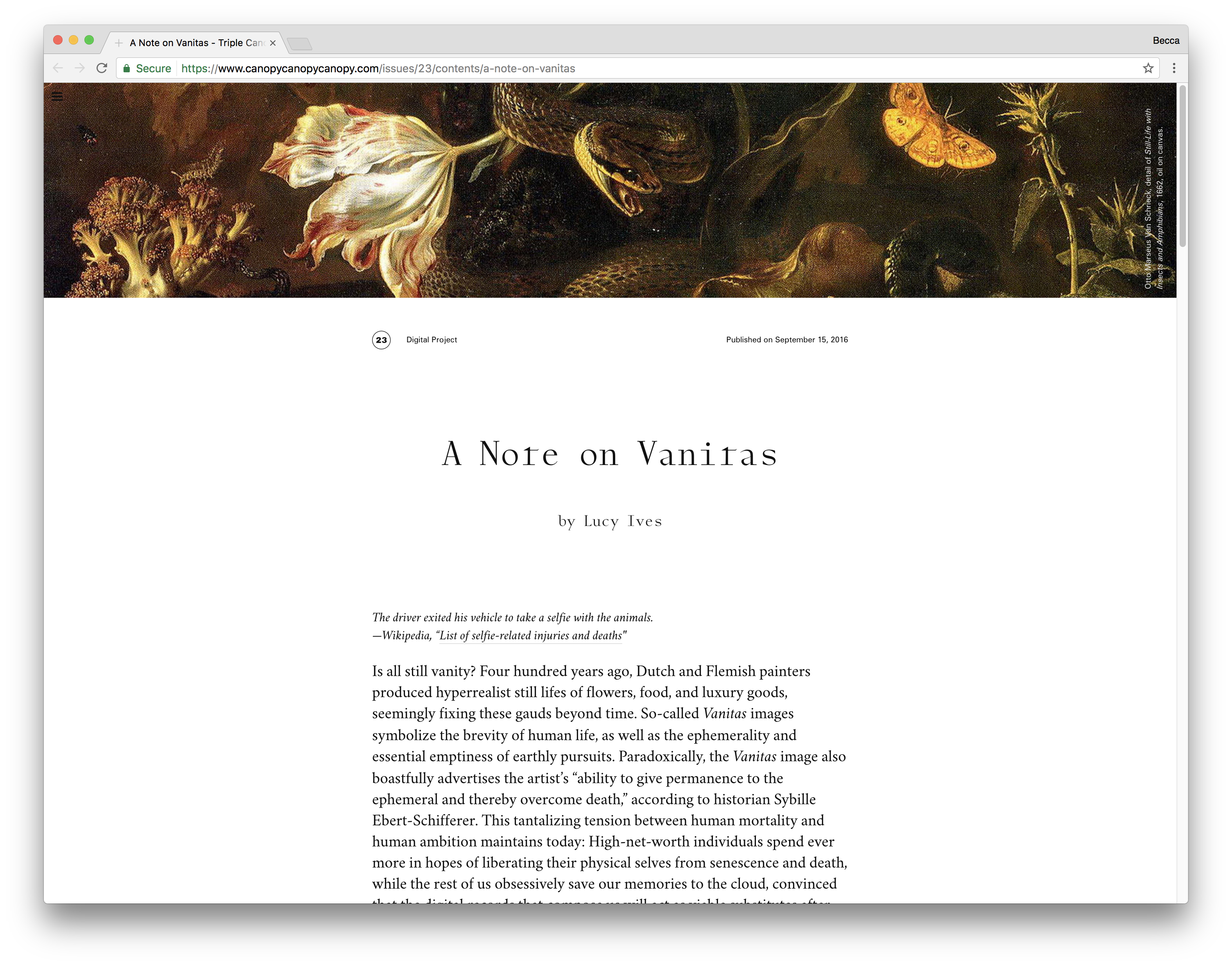